Elk Mill in Oldham was the last mule spinning cotton mill to be constructed in Lancashire when it was completed in 1927. When it closed 71 years later the region’s traditional textile manufacturing industry had almost entirely disappeared, with great consequences for former cotton towns like Oldham, their economies and their communities.

On a visit to Elk Mill Shopping Park in Royton, Oldham today, a collection of public artworks is the only trace of the huge cotton mill that stood on the site until its demolition in 1999, their presence a reminder of a period that witnessed a complete reorganisation of the global cotton economy, with Lancashire experiencing a radical decline from its world-leading position as textile industries elsewhere grew dramatically.

This story begins at the yarn of Emma Hunter’s commemorative artwork The Spinners to follow some of the global threads that connected Lancashire and India during this period of change.

Oldham and the global cotton economy

Cotton has linked the people of Lancashire and South Asia for hundreds of years. Cotton cloth was first brought to Britain from India around 500 years ago. Finely woven, beautifully dyed in bright colours and easier to wash and dry than the heavy, woollen fabrics people in Britain were used to, it became highly sought after.

South Asia had been the world’s foremost cotton manufacturing region for centuries until the mechanisation of cloth production in Britain during the Industrial Revolution. British manufacturers wanted to find way to imitate hand-made Indian cotton goods. India’s highly-skilled hand loom weavers were severely impacted by cheaper, mass-produced cotton goods pouring out of Lancashire and the high import duties imposed by Britain on Indian cloth.

As Lancashire’s textiles industry grew, Oldham specialised in spinning as cotton came to dominate its economy, employing tens of thousands of local people. By 1890, Oldham’s mills were responsible for 12 percent of the world’s cotton spinning capacity and India, under the control of a British imperial government, became the largest export market for Lancashire-made cotton goods.

Elk Mill was built by textiles manufacturing company Shiloh Spinners (then called Shiloh Mills Ltd). Founded in 1874, Shiloh owned a number of factories across Oldham and the surrounding area. The company got its name from Shiloh Mill, itself named after the town of Shiloh in Tennessee, from where first slave-grown cotton used at the mill was shipped.

Elk Mill was fitted with 42 pairs of Platt Brothers spinning mules, with a total of 107,240 mule spindles. The machinery was powered by a steam turbine, which also drove a generator powering electric lighting in the mill.

“When Tommy Gartside built the Elk, it was the talk of Royton! The Elk was really something, an excellent building.”

A former Elk Mill employee who was ten years old when the mill was built.

Many people were surprised at Shiloh chairman Tommy Gartside’s decision to invest in a brand-new mill at a difficult time, with many referring to the building as “Tommy’s Folly”. In the 1920s, Lancashire’s cotton industry was experiencing a serious depression. Exports had suffered during the First World War and never returned to pre-war levels owing to rising competition from nations like India, Japan and the United States, where investment in new machinery and lower labour costs enabled production of cotton at cheaper prices than Lancashire.

The installation of spinning mules at Elk, which were less efficient than more modern ring-spinning frames, was also considered a risk by some. Spinning mules were still generally better at that point for production of more expensive, high-quality yarn but the technology had changed little for decades.

Despite these challenges, Elk Mill proved to be Shiloh Spinners’ most productive mill. Yarn manufactured there was woven into cloth in mills across Lancashire, and much of this was then exported to countries across the world.

When the Elk first opened, it employed 380 people, who each worked 45 hours a week, starting at 7:30am and finishing at 5:30pm. From taking in deliveries of raw cotton and running machinery to moving cotton around the mill and packing finished goods for shipment, a large range of jobs were required to run the factory, providing employment for women, men and young people.

Shiloh Spinners prided themselves on having good relationships with their employees. Company-funded social and leisure activities were central to workplace morale and community. Elk Mill employees took part in pageants, pantomimes and sports days and the company provided extensive sports facilities and a full-time sports officer and coach.

“Shiloh was a great company to work for. They were always extremely interested in all their employees. Everything was available for their enjoyment – both during work and leisure. We had bingo at lunchtime, during the 1960s when it was popular. We ran whist drives in winter and enjoyed potato pie in the interval.”

Employees received holiday cards from the management and were thanked for their work ethic and commitment. Workers were also offered a variety of benefits as part of their employment. Elk Mill had a nursery which could accommodate 74 children aged from aged 6 months to 5 years, and it also provided laundry facilities. Employees also received a share of profits each year and there were bonuses for long service. Labour shortages were a constant problem for the Lancashire textiles industry during this period and these benefits were designed to help to attract and maintain loyalty in employees.

Although Shiloh Spinners aimed to be a good employer, there were instances of conflict between workers and managers. In 1928, Elk Mill was found guilty of time cribbing, and fined £58 for this offence. Time cribbing was the practise of keeping machinery running into the period reserved for workers’ breaks, which meant employees went unpaid for this extra work. There was further unrest at the Elk in 1946 during a national pay dispute, when workers went on strike in protest against ‘excessive dust and dirt’ in the mill, caused by cotton fibres, which they complained was affecting their health and was not being addressed by management.

“Messrs. Platt Brothers and Company, Oldham, have secured the contract for the equipment of the new Elk Mill now in course of creation at Royton for the Shiloh Mills, Limited, Royton. The order is for 110,000 mule spindles and the necessary preparatory machinery.”

Oldham was not only a global centre for cotton spinning, it was also one of the largest producers of cotton manufacturing machinery. Founded in 1821, Oldham-based Platt Brothers supplied mills across Lancashire, including Elk, with the machinery used at all stages of the textile making process, from cleaning raw cotton to combing the fibres, spinning fibres into yarn to weaving it into cloth. By 1900, they were the largest textile machinery makers in the world, employing 15,000 people. 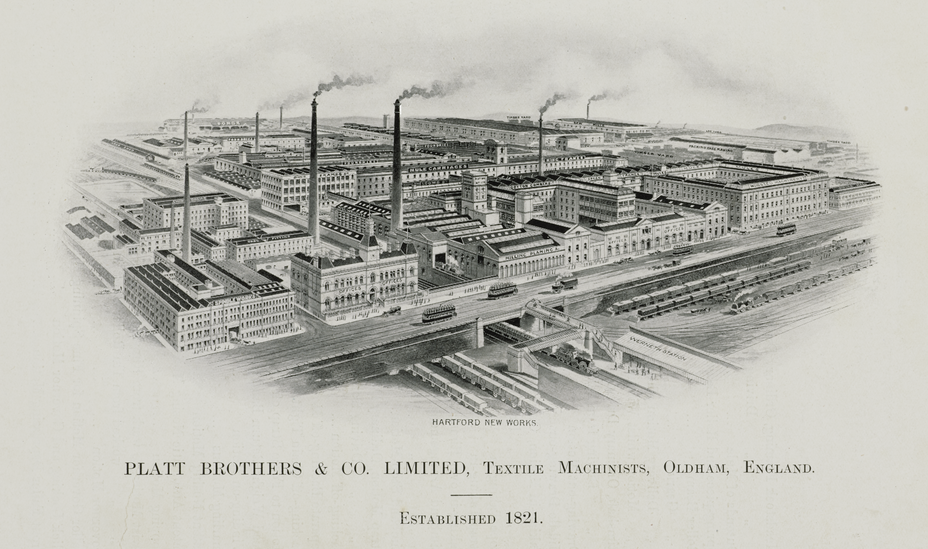 As well as supplying Lancashire’s mills, Platt Brothers also exported machinery across the world, including to the growing textiles industries of the United States, China, Japan, Russia, South America and South Asia. Platt Brothers’ overseas exports expanded dramatically in the twentieth century, whilst orders from the home market declined.

From the 1850s, India’s mechanised cotton industry began to expand, growing rapidly during and after the First World War. The first modern industrial mills were built in Bombay, now Mumbai, by the Bombay Spinning & Weaving Company, founded by Cowaszee Nanabhoy Davar. They were fitted with Platt Brothers machinery made in Oldham. Thousands of workers flocked from rural areas in search of work as Indian entrepreneurs invested in the industry. 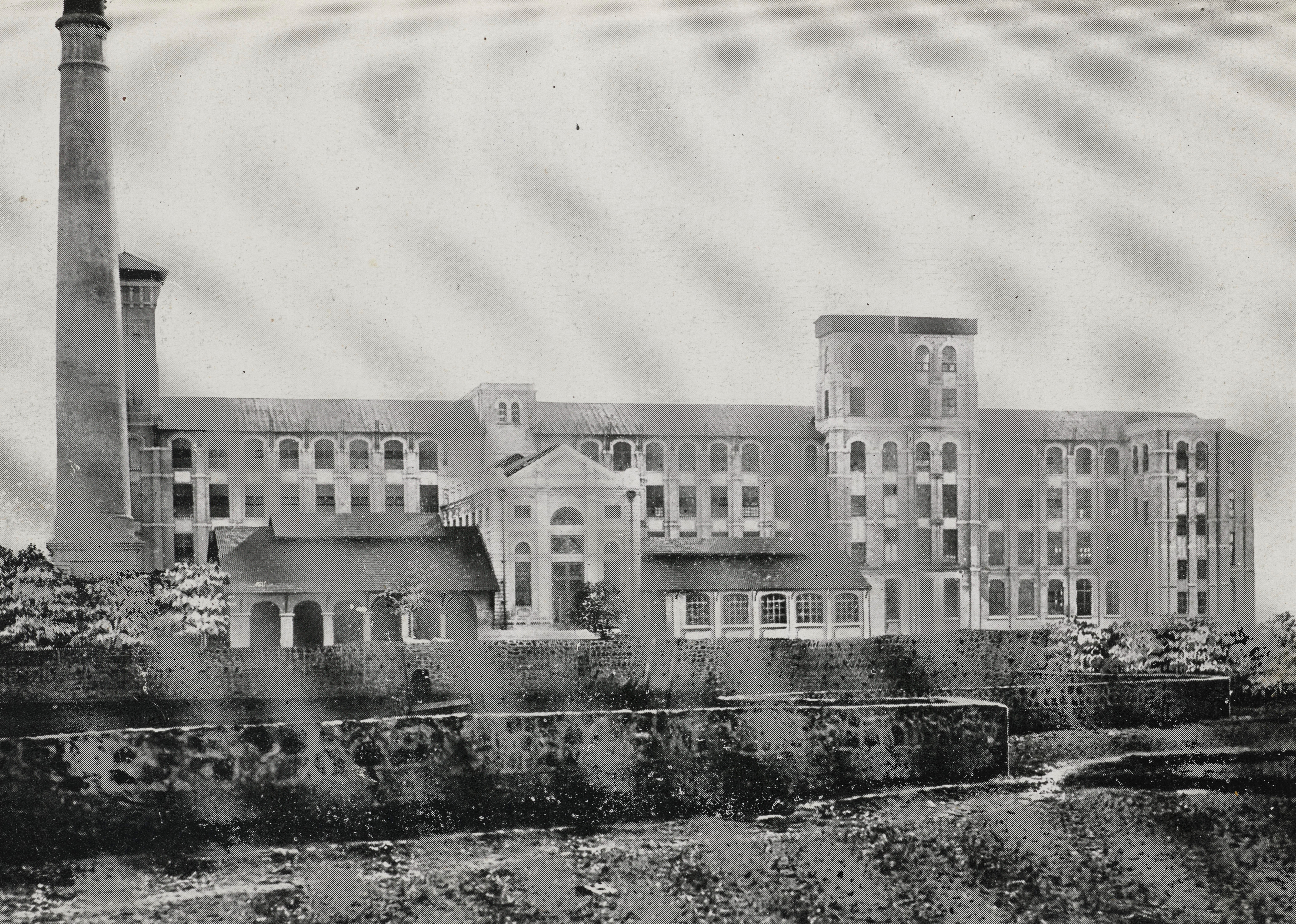 India’s cloth exports increased and cotton became closely linked with the movement for independence from British rule. As its cotton industry developed, Platt Brothers’ exports of textiles machinery from Oldham to India grew to meet the demands of Indian mill owners for machinery.

End of an era

By 1938, 95% of the machinery made by Platt Brothers was being exported to equip textile mills outside of the UK. That same year, Platt Brothers’ chairman Sir Walter Preston gave a speech at the company’s annual general meeting where he blamed the decline of Lancashire’s textiles industry on its lack of investment in new, modern machinery.

“I am still convinced that if Lancashire as a whole could have found the money to spend on buying machinery as up to date as that which we have been sending abroad for years past, Lancashire would have acquired at least one of the weapons essential to the recovery of some part of the trade which has been lost.”

However, unlike other companies, Shiloh Spinners did invest in the modernisation of Elk Mill. In 1974, they retired the mill’s spinning mules and installed upgraded machines including ring spinning frames, which enabled them to produce more specialised yarn at lower prices. It was this investment which enabled Elk Mill to remain operating so long, whilst hundreds of mills across Lancashire, including others owned by Shiloh, were closing.

“I started in 1930 – tubing for the mule. I worked 48 hours for 11 shillings and 8 pence. In today’s money, that would be 59p … I remember two mule spinners – Frank Devine … and Jimmy Roddy and I will never forget their absolute look of despair when their machines stopped for the final time.”

Elk Mill worker remembering the last day of mule spinning at the mill in 1974.

Despite this investment, by 1998, Elk Mill was no longer profitable. Sales dropped and Shiloh Spinners chairman Edmund Gartside, blaming the company’s inability to compete with the lower prices of overseas imports, shut down the mill that year. He had been a vocal campaigner for the Lancashire textiles industry, urging successive governments to support cotton manufacturers by limiting imports and funding the modernisation of machinery.

When Elk Mill closed, it was one of the last cotton spinning mills operating in Lancashire. Whole communities were impacted by the closure of mills like Elk. The decline of what had been Lancashire’s foremost industry caused widespread unemployment and hardship and the economic recovery of former cotton towns like Oldham is an ongoing process.

From Oldham to Mumbai, cotton has shaped and reshaped the fortunes of and connections between people and places across the world. The site where Elk Mill once stood is now a shopping centre, providing employment to local people in a different way. Home to numerous clothing stores, the site remains a part of the global cotton economy through the textile products sold there, most of which are manufactured in South and East Asia.

Through the clothes we wear on our backs every day, we are physically connected to the garment factory workers of South Asia, many of whom work under exploitative conditions without the benefits employees at mills like the Elk had. Developing more sustainable and ethical clothing practices remains one of the most important issues facing our modern, globally-connected textiles industry.

This project has been supported by the UCL UK Office, supporting the development of collaborations and research impact across the UK.